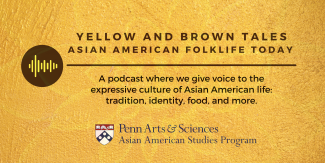 Yellow and Brown Tales: Asian American Folklife Today is an exploration of the cultural history of Asian Americans and their lives now. Acknowledging the many aspects of Asian American life that have been unheard and unseen for “yellow” and “brown” Americans, these stories uplift and showcase their rich expressive culture. This podcast distinctively positions the Asian experience at the center of the American landscape and Asian American folklore as a critical emergent area of study.

Join folklorists Fariha Khan, Margaret Magat, Nancy Yan, and Juwen Zhang as they highlight the diverse narratives, practices, traditions, and customs of the fastest-growing population in the U.S. Each month will feature two podcasts that explore yet another aspect of Asian American life –making the invisible clearly visible!

For more information, a transcript, or permission to cite this podcast please email asianamerican@sas.upenn

Listen to Episode 10: "Shang Chi: Asian American-ness and Beyond"

Listen to Episode 9: "The Beginning of Public Celebration of Chinese New Year in the US"

Listen to Episode 8: "Water Beliefs and the Importance of Energy: A Conversation with Folklorist Dr. Wennifer Lin"

Listen to Episode 7: "Asians and the Global Pandemic: Race, Invisibility, and the Urgency of Asian American Folklore Studies"

Listen to Episode 5: "Altars and Asian American Business Owners during the Pandemic"

Listen to Episode 2: "Conversation with Margaret Magat, Author of Balut: Fertilized Eggs and the Making of Culinary Capital"

Listen to Episode 1: "What is Asian American Folklore?"

Margaret Magat is a Cultural Resources Program Manager with a Ph.D. in Folklore and Folklife from the University of Pennsylvania and an MA in Folklore, University of California, Berkeley. She has published on foodways, historic preservation, women and transnational migration, and Asian American cultural practices. Her first book is called Balut: Fertilized Eggs and the Making of Culinary Capital in the Filipino Diaspora (Bloomsbury, 2019.) She was senior convener for the Transnational Asia/Pacific Section (2018-2020) of the American Folklore Society (AFS) and is now an adviser to the current conveners. She is also a member of AFS’ Cultural Diversity Committee.

Nancy Yan received her Ph.D. in folklore from The Ohio State University and taught First and Second-Year Writing, Comparative Studies, and Asian American Studies classes for several years before returning to organizing work.  She served on the Cultural Diversity Committee of the American Folklore Society from 2017-2019 and is a member of the Board of Directors of New Faculty Majority, an advocacy organization for non-tenure-track faculty. She is also a host on New Books in Folklore, part of New Books Network. Currently, Dr. Yan works for the American Federation of Teachers-Maryland as an organizer.

Juwen Zhang, is a Professor of Chinese and Folklore at Willamette University, Oregon, USA, with his Ph.D. in Folklore and Folklife in the University of Pennsylvania, Fellow of American Folklore Society, and current President of Western States Folklore Society. He has published his studies on rites de passage, Chinese/Asian American folklore, folkloric film, and folkloric identity in major folklore journals both in English and Chinese, along with two-way translations of Chinese and English works of folklore studies. He led the creation of the East Asia Folklore Section in 2005 (now the Transnational Asia/Pacific Section), and organized the special issue in the Journal of American Folklore on Asian American Folklore (2015.)

Find the podcast on Spotify

© 2022 The Trustees of the University of Pennsylvania
Penn Weblogin