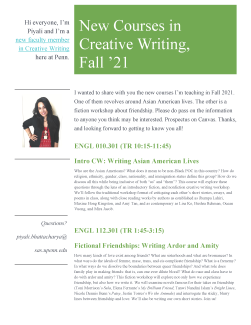 This course will be crosslisted with our program in Spring.

Piyali Bhattacharya is a fiction and nonfiction writer whose short stories and essays have appeared in Ploughshares, The New York Times, The Wall Street Journal, and National Geographic, among other publications. She is the editor of the anthology Good Girls Marry Doctors: South Asian American Daughters on Obedience and Rebellion, which received an Independent Publisher Book Award, and a grant from the National Endowment for the Arts. She holds a B.A. from Bryn Mawr College, an M.A. from SOAS—University of London, and an M.F.A. from the University of Wisconsin—Madison, where she was winner of the Peter Straub Award for Fiction. She is currently at work on her first novel, which has been supported by fellowships from Hedgebrook, the Virginia Center for the Creative Arts, and ARGS.