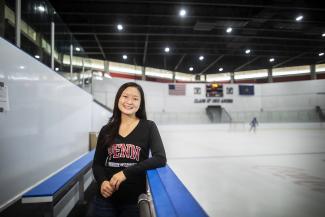 "In Eng’s class, Lee learned that some of this disassociation comes from a lack of fully belonging to either Asia or America, she says. “In America, when people look at me, I’m not seen as American, and if I go back to China people can tell that I’m not Chinese-born, Chinese-raised. So, you don’t really fit in anywhere,” Lee says."

Read the article here!
© 2022 The Trustees of the University of Pennsylvania
Penn Weblogin